This appointment will enable Noida International Airport (NIA) to set a new benchmark as a digital airport. Through the implementation of state-of-the-art technology, the airport will provide a seamless and mostly contactless flow. This will be archived through the use of integrated systems, services and technologies such as indoor navigation, passenger flow management, and data analytics.

The digital environment to be set up at NIA includes paperless digital processing. This will be applied across all checkpoints in line with the Indian Ministry of Civil Aviation’s DigiYatra Policy. Visakhapatnam Beach Road Corridor in India to be world’s best

Christoph Schnellmann, the Chief Executive Officer at YIAPL said that they were pleased to partner with ICAD to bring alive their vision of a digital airport.

“Noida International Airport will be a truly modern, efficient, and customer-friendly airport. It will offer the highest levels of convenience and ease of making connections to the passengers as well as commercial benefits to its partners. Furthermore, the digital greenfield airport will enable a contactless travel experience and cost-efficient operations for all airport users,” explained Schnellmann.

Ghassan Sayegh, the ICAD Group CEO on the other hand said, “We at ICAD will work closely with Noida International Airport to deliver India’s most advanced, integrated, and eco-sustainable airport. This is the 45th Airport Project that ICAD has undertaken, globally. It opens our window of opportunity to offer our expertise & services to the East.

In due course of time, we look forward to more awards with NIA and other airports in the country. In the capacity of an MSI consultant, we hope to fully support NIA with the systems integration design, program management and integration of ICT and Airport Systems.”

With Yamuna Expressway Industrial Development Authority (YEIDA) as the project implementing agency on behalf of the government of Uttar Pradesh, the Noida International Greenfield Airport project is being implemented in four phases.

The first phase, which involves capital investment to the tune of US$ 730.5M or its thereabouts, will see the construction of one 3900m runway, one 101,590sqm passenger terminal, 28 aircraft parking stands, and other airport support facilities on a 1,334 hectares piece of land.

Also Read: Isiolo International Airport project timeline and all you need to know

The airport, following the completion of its initial phase, will have a capacity to serve 12 million passengers a year and it will allow the diversion of a portion of the IGI airport’s passenger traffic. In the second to the fourth phases, the Noida International Greenfield Airport will be expanded into a 7,200 acres facility with a total of 6 runways and the capacity to handle over 100 million people per year.

Since 2019, there has been a proposal to construct two additional runways as part of future expansion and if there will be enough land, to bring the total to eight. The proposal has been given a green light by Chief Minister Yogi Adityanath.

The project was proposed by the Uttar Pradesh chief minister Rajnath Singh as a greenfield Taj International and Aviation Hub (TIAH) and it was set to be constructed at Jewar village near Greater Noida, adjacent to the Yamuna Expressway. Fast forward, in June 2015, the civil aviation ministry cleared the proposal for the new airport, which would now be known as the Noida International Greenfield Airport, to be set up on 2,200 acres of land.

In August, YEIDA commenced financing for the project.

Flughafen Zurich AG was selected as the preferred bidder for a 40-year concession to design, develop and operate Jewar Noida International Airport. In September YIAPL received the final approval for its master plan for the Jewar Noida International Airport development project.

In early November, the Yamuna International Airport Private Limited (YIAPL), which is a special purpose vehicle formed to develop and operate the Noida international airport in Jewar, announced that it had completed 18% work on the boundary wall of the project.

At the same time, the company announced the possibility that the Uttar Pradesh government represented by Prime Minister Narendra Modi would lay the foundation stone of the mega project by the end of the month (November 2021).

Indian Oil Skytanking Ltd. (IOSL) was awarded a 30-year concession to design, build, and operate fuel infrastructure, including a multi-user fuel farm and hydrant system for the Noida International Airport.

Particularly IOSL will build facilities that will include ‘10,000 m3’ of fuel-storage tanks with inbuilt flexibility to increase the capacity rapidly as per air traffic demand and support by an underground hydrant system connecting all aircraft stands, remote and contact, with fuel pipelines.

Uttar Pradesh government approved the social impact assessment report for the second phase of the Noida International Airport project that envisages setting up a third runway, and commercial maintenance, repair, and overhaul (MRO) of the aircraft centre, which shall ensure the service worthiness of an aircraft thanks to the planned facilities for inspection and maintenance. 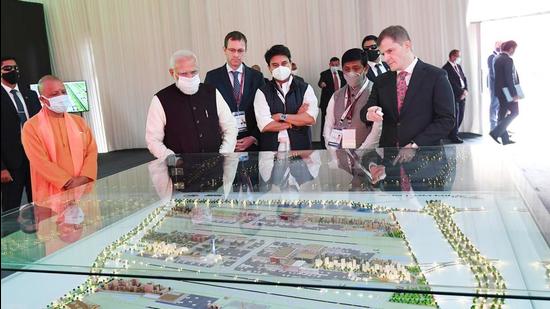 Reportedly, the process to acquire land in Karauli Bangar, Dayanatpur, Kureb, Ranhera, Mundhera and Nagla Hukum Singh villages for this phase would begin in January 2022.

“From January we shall organize camps at the six villages on January 7th, 8th, and 10th to take the consent of the farmers, who are likely to be affected by the land acquisition process. The suggestions and objections of those opposing the project shall be noted down for suitable remedial action,” said Balram Singh, additional district magistrate (land acquisition), Gautam Budh Nagar.

The engineering, procurement, and construction (EPC) contract for the Noida International Airport Project has officially been awarded by the Yamuna International Airport Private Limited (YIAPL) to TATA Projects Ltd, one of India’s fastest-growing engineering, procurement & construction companies with experience and expertise in executing large, complex industrial and urban infrastructure projects.

The company was selected out of three shortlisted teams after it displayed the best experience in the design, procurement, and construction of large infrastructure projects. The Chief Executive Officer of Yamuna International Airport, Mr Christoph Schnellmann expressed that they are pleased to have partnered with TATA Projects for the EPC contract for the Noida International Airport Project.

He revealed that the project has commenced its next phase which will observe a rapid increase in the construction activities on site adding that together with TATA Projects, they will deliver a runway, and passenger terminal, alongside other airport infrastructure. Mr Christoph also stated that they aim to promote, strengthen and enable an all-inclusive sustainable development of the aviation ecosystem in the country.

The Noida International Airport Project will combine a mix of Swiss technology and efficiency with Indian hospitality and culture to develop a modern, user-friendly design that is majorly inspired by India. For the passenger terminal, it is confirmed to encompass certain parameters such as digital services, passenger flows, and absolute commitment to minimal environmental impact.

The project aims to also develop a digital airport in the country that will enable personalized services and contactless travel for business travellers as well as families and the elderly. By 2024, the airport projects to reach a capacity of 12 million passengers annually.