As the New Administrative Capital (NAC) takes shape, its technological core dubbed “the Knowledge City” is nearing completion with the first phase, the construction of which began in 2020, expected to open this year.

The first phase of Knowledge City consists of four buildings that include a building for innovation and applied research, another for technical training, a building for research and development in assistive technology, and the Egypt University of Informatics.

At the end of his tour, Talaat thanked the Engineering Authority of the Armed Forces, one of the Egyptian Ministry of Defense agencies that is carrying out the project for its efforts to complete the construction of the city at the highest level.

In related news, the government of Egypt has redrawn Cairo’s administrative borders to enclose the approximately 46,000 feddans of the 184,000-feddan New Administrative Capital (NAC), in which the new headquarters of House of Representatives and Senate are located, in order to fit the North African country’s constitution that requires both bodies be headquartered in the Egyptian capital.

According to a statement released recently by the Egyptian National Center for Planning State Land Uses (NCPSLU), the new space includes the 40,000-feddan first phase of the NAC in addition to 6,000 feddans designated for transport linkage grid with other country’s cities. New Administrative Capital (NAC) is a large-scale project of a new capital city that has been under development since 2015 on 700 square kilometers of land located approximately 45 kilometers east of Egypt’s capital city, Cairo, and just outside the Second Greater Cairo Ring Road, in a largely undeveloped area halfway to the seaport city of Suez

Announced by the then Egyptian housing minister Mostafa Madbouly at the Egypt Economic Development Conference in March 2015, generally, the city, the construction of which is estimated to be US$ 45bn, is set to consist of 21 residential districts and 25 dedicated districts.

It will also have amenities such as a central park, artificial lakes, about 2,000 educational institutions, a technology and innovation park, 663 hospitals and clinics, 1,250 mosques and churches, a 90,000-seat stadium, 40,000 hotel rooms, a major theme park four times the size of Disneyland in the USA, 90 square kilometers of solar energy farms, an electric railway link with Cairo and a new international airport at the site of the Egyptian Air Force’s existing Wadi al Jandali Airport.

According to plans, the city will become the new administrative and financial capital of Egypt upon completion between 2020 and 2022, housing the main government departments and ministries, and foreign embassies. It will have a population of 6.5 million people and it is estimated that the figure could rise by half a million to seven million.

A memorandum of understanding was signed in 2015 between UAE-based Capital City Planners and the government of Egypt to undertake the project that would give rise to a modern, new city in Egypt to replace the old.

The announcement was received with excitement but skepticism still remained and would be validated only a few months later when the MOU was withdrawn by the government of the North African country citing lack of progress on the part of Capital City Planners.

A new deal was signed later the same year with China State Construction Engineering Corporation (CSCEC) for the construction of buildings that would house government ministries and agencies as well as the president’s office. Particularly, the Chinese firm would build a new parliament complex, 12 ministerial buildings, a convention center, and an exhibition area.

These facilities would form the nucleus from which the rest of the city would grow as demand for other amenities such as housing and shopping would stem.

CSCEC was awarded by the Ministry of Housing, Utilities & Urban Communities a contract to build the Central Business District (CBD) a total area of 1,900,000 square meters in the NAC.

The project consists of 20 buildings, including 12 high-rise office buildings, five high-rise apartment buildings, two luxury hotels, and a 385.8m tall Iconic Tower, which will be the tallest in Africa. The whole project is scheduled to be delivered by 2022.

CSCEC officially started the implementation of the CBD project.

The government of Egypt through the states Civil Aviation Ministry started a one-month trial on the newly built international capital airport in the heart of the upcoming New Administrative Capital.

Speaking during the launch of the pilot operation Wael al-Nashar, the Chairman of the Egyptian Company for Airports, said that the new aviation hub will serve the residents of East Cairo, Al Shorouk City, Heliopolis as well as the cities and governorates in the Canal plus contribute to the development of the Suez and Ain Sokhna ports, where logistics and industrial zones will be set up in the future.

An overview of the New Administrative Capital Airport

The New Administrative Capital Airport whose main terminal building is erected on an over 5,000 square meters parcel of land with 45 service and administrative buildings in the perimeter has the capacity to accommodate 300 passengers per hour enough to narrow down the load on the Cairo International Airport.

The structure has also 8 parking lots for aircraft and on which 500 cars and 20 buses can be comfortably parked. The airport is well designed with a 3,650-meter runway suitable for receiving large aircraft and its outline allows future expansion for a much larger capacity should there be any plans for the upgrade. The runway is also equipped with lighting and automatic landing systems.

In addition, the airport is fitted with state-of-the-art airport security, management, and operating systems, a 50-meter-high on an air-control tower and it will feature charter flights, opposed to Cairo International Airport.

Ministry of Antiquities signed a cooperation protocol with Almasa Group for the construction of a new archaeological museum in the City of Arts and Culture within the NAC.

The two-floor structure, whose construction and implementation of lighting systems will be overseen by the New Capital’s City of Arts and Culture, will be built on an area of 8500 square meters, housing the main exhibition hall and an assembly of galleries.

The NAC’s district (city) of Arts and Culture will also be home to a new opera house that sits on 86,000 square meters of land accommodating up to 2,200 individuals. Within its perimeter, the city is also planned to have a 9,000 square meter central library and a number of buildings for music, cinema, painting, and sculpture, in addition to a wide range of restaurants and various services for visitors.

According to Mostafa Waziri, the Supreme Council of Antiquities Secretary-General, the museum’s entrance will be ornamented with two Egyptian obelisks, which are originally from the eastern San Hajar area in Sharqiya. The museum will also exhibit the freshly discovered Toto cemetery, which was recently unveiled in Sohag.

“This museum will feature a variety of artifacts that reflect the history of all the Egyptian capitals from the ancient to the modern as well as the country’s cultural past,” said Waziri.

The Supreme Council of Antiquities is responsible for the organization of the full security of the museum, the design of the showrooms, and the selection of artifacts to be displayed in addition to setting them up.

Egypt launched its first ministerial headquarters in the NAC. The headquarters of the Ministry of Finance had been furnished and equipped as a model for the rest of the ministries.

Hill International was been awarded a contract to provide project management, design review, and implementation supervision services for the New Administrative Capital City and 6th of October City Monorail project, the first of its kind in North Africa and the longest monorail system in the world at a total length of 98.5 km. The project’s first line will extend 56.5 km from East Cairo to the NAC while the second line will be 42 km long connecting the 6th of October City to Giza.

The project will use the design-build-operate-and-maintain (DBOM) delivery method and includes 34 stations, including both elevated and at-grade locations, and associated works including maintenance facilities, depots, and an Operations Control Centre. The monorail will also intersect with the Cairo Metro’s Line 3 as well as Cairo’s High-Speed Rail network, further connecting the dynamic Cairo region.

The Egyptian Parliament’s Transport and Communications Committee also approved a US $2.2bn loan facilitation agreement between the National Authority for Tunnels and GB Morgan Europe Limited and other financial institutions, for the construction of the monorail lines at the New Administrative Capital (NAC) and 6th of October city.

The government of Egypt is set to construct a new National Energy Control Center in the New Administrative Capital (NAC), a large-scale project currently under construction in Cairo, the North African country’s capital city.

The country has up till now, through the Egyptian Electricity Transmission Company (EETC), awarded the contract for the project to a consortium made up of Siemens Smart Infrastructure, which is a department of Siemens AG, and Hassan Allam Construction, which is a subsidiary of Hassan Allam Holding, Egypt’s leading engineering, construction, and Infrastructure Company.

According to a statement released by Siemens, the contract is worth US$ 53.4m and the project is expected to be completed by the end of 2022.

An insight into the future National Energy Control Center

The future National Energy Control Center with a backup control center in Giza will run on Siemens Spectrum Power 7, which is the company’s flagship control center platform for transmission management in energy networks.

The high-performance platform includes a wide range of applications for grid monitoring and supervisory control, load and wind or solar power generation forecasting, network analysis, and optimization, cross-optimized thermal and hydro generation scheduling as well as generation dispatch and control.

According to Sabah Mashally, EETC ‘s chairperson, this project is another step toward a robust, smart, and efficient electrical grid that is not only crucial to Egypt’s economic development, but also to the enabling of faster implementation of renewable energy sources in the country.

The project further strengthens the close and successful cooperation between Egypt and Siemens to modernize the country’s electricity sector, after the joint development of the master plan for the Egyptian transmission network.

The first office tower in Egypt’s New Administrative Capital was complete according to the contractor CSCEC. Dubbed the C08, the office tower had the final piece of its curtain wall installed at the beginning of the year, making it the first building to be complete in the new capital’s Central Business District (CBD). 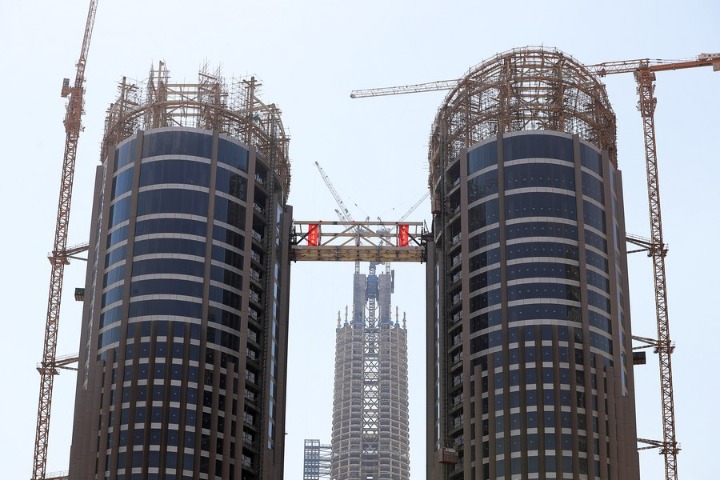 The lifting and installation of an iconic air corridor in Egypt’s new administrative capital at about 141 meters above the ground, was successfully completed after 18 hours of hard work. Described as the Corridor of China-Egypt Friendship or the Gateway to China-Egypt Cooperation, the air corridor connects two office buildings in the NAC’s central business district (CBD). It is made of steel and spans over 31.4 meters with a weight of 161 tons.

Reportedly, this is the first time that the CSCEC, which has been contracted to build the NAC’s CBD, adopted in the North African country the efficient technique of assembling the air corridor on the ground before lifting and fitting it mid-air.

Arguably, this technique saves both time and effort and it also lessens safety risks.

The government of Egypt is set to start moving to the government district in New Administrative Capital (NAC) in December this year, according to a presidential statement released in early November 2021.

The statement noted that this move will mark the beginning of a six months trial phase of the new premises whose construction began back in 2015 under the directive of President Abdel-Fattah el-Sissi.

Though construction on the US$ 45bn city was slowed by the Covid-19 pandemic, “approximately 98% of the construction work in the city’s government district, which comprises 34 government buildings that will house the 32 ministries of the nation’s cabinet along with two other state authorities, has been completed” according to NAC spokesman Khaled Husseiny.

Noteworthy, the government district has been designed in a markedly pharaonic style and it is set to be the focal point of the NAC.