The Brightline Boca Station in Florida has broken ground as part of the Brightline Orlando-Miami Rail Project that is aimed at connecting Boca Raton passengers to Miami, Aventura, Fort Lauderdale, and West Palm Beach, with an upcoming station in Orlando.

Brightline’s Boca Raton 38,000-square-foot station was designed by Zyscovich Architects and will contain facilities such as the autonomous MRKT and premium lounge. It will be located on a 1.8-acre property across from Mizner Park and near to the downtown library. With a cashless environment, touchless turnstiles, and high-speed WiFi, the station will provide a smooth modern travel experience. The Brightline Boca station is scheduled to open in the fall of 2022.

The groundbreaking of Brightline’s Boca station comes after the start of construction on the station’s parking structure, which was announced in December 2021. The building of the Boca Raton station is estimated to generate more than 480 construction jobs and contribute more than US$23 million in salaries. The Federal Railroad Administration (FRA) awarded Brightline a US$16.3 million Consolidated Rail Infrastructure and Safety Improvement (CRISI) grant in 2021 to support a portion of the building of the Brightline station, parking garage, and other rail infrastructure. The city has contributed US$9.9 million to build the parking structure in addition to the CRISI award. Brightline will pay the remainder of the project, which is expected to cost around US$30 million.

“As a major business and leisure destination, Boca Raton is an ideal match for Brightline and will be a vital element of our network that will link the state of Florida even further.” Brightline stations help to improve the local communities and economies in which we operate, as well as provide tourists with easy access to state-wide lifestyle and tourism sites. “We look forward to a long and fruitful engagement with the Boca community,” Brightline President Patrick Goddard said. The station is designed to increase relations between Boca Raton and the rest of Florida’s south and central coasts. The Brightline Orlando-Miami Rail Project  is a privately run inter-city rail line that runs between Miami and West Palm Beach in Florida. The rail began operation over its current route in January of 2018 however construction is underway for a 170-mile extension to the line to the Orlando International Airport and is expected to go into service in the coming year.

The Florida East Coast Industries (FECI) announced plans to operate a passenger rail service between Miami and Orlando. The construction was projected at the time to be US$1.5 billion.

All Aboard Florida under FECI applied for a US$1.6 billion Railroad Rehabilitation & Improvement Financing (RRIF) loan, which was administered by the Federal Railroad Administration, and in late 2014, the company applied for a US$1.75 billion private activity bond allocation, with proceeds from the bond sale substantially reducing or replacing entirely the amount of the RRIF loan request. The company then received a Finding of No Significant Impact from the Federal Railroad Administration, effectively clearing the way for work to begin between Miami and West Palm Beach.

Construction work on the Fort Lauderdale station began with the demolition of existing buildings on the site. A groundbreaking ceremony for the West Palm Beach station was held in November 2014 and in the following year, All Aboard Florida announced that the service would operate under the name Brightline. 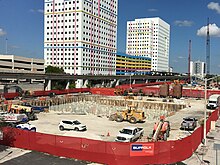 Service began between Miami and West Palm Beach in May of 2018. In November 2018, it was announced that Virgin Group would become a minority investor in the railroad and would provide rights to rebrand the service as Virgin Trains USA, however this agreement between the two companies was short-lived as two years later, they reverted to the Brightline name, ending the branding deal, claiming that Virgin had not provided the agreed investment money. Brightline however was sued by Virgin for US$251.3 million for breach of contract. 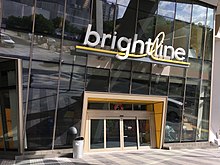 In April of 2019, Brightline secured US$1.75 billion in funding for the Orlando extension and said construction would begin right away. Hubbard Construction Company, Wharton-Smith Inc., The Middlesex Corporation, Granite, and HSR Constructors, are all announced as contractors that would be responsible for the 170-miles of track development.

The rail company announced that they had made an agreement with Walt Disney World Resort to construct a station in Disney Springs as a part of its Tampa extension, providing a high-speed rail connection to Walt Disney World Resort and the vicinity. The proposed station would include a lobby on the passenger facilities, ground level, and an upper-level train platform. In February 2020, Brightline broke ground on engineering and design work for the proposed project. The high-speed rail corridor between Disney Springs and Orlando International Airport will cost US$1 billion and travel alongside Florida State Road 417. Passenger service is expected to start by 2026.

What we reported in January 2021

The Miami-Orlando rail line that will connect Miami and Orlando has reportedly reached the halfway mark in construction according to Brightline. The company provided a statement citing that they hope to have the Miami-Orlando rail line train service operational by the end of 2022, with a planned fare of $45 from Miami to West Palm Beach and $100 from Miami to Orlando. Brightline acquired a rail right of way along the coast of Florida in 2007 and sold track rights for freight to the mining conglomerate Grupo Mexico. It retained passenger track rights. When its Brightline service is completed, its diesel cars will carry passengers more than 235 miles from Miami to Orlando in about three hours.

Eventually, company officials said, Brightline hopes to reach further into Southern California, which is not an easy or inexpensive ambition. From Victorville, the 15 Freeway drops more than 3,000 feet through the serpentine Cajon Pass. Brightline and Disney World also reached an agreement and will have a train go through Orlando to the amusement park. Brightline trains would also take two hours to cover the 185 track miles from Barstow to Las Vegas, at an average speed of 92 mph.

They also said they didn’t expect that coronavirus safety measures would affect their Miami-Orlando rail line construction timetable. Brightline said that the stop would be a huge convenience to the millions of people each year heading from South Florida to the theme parks and vice-versa.

Brightline executive vice president of infrastructure, Cegelis stated that crews had worked 4.3 million manhours on the 169-mile Brightline Orlando-Miami Rail Project thus far. Over 1,300 workers are on the project which is 63% complete.

In Brevard County, Brightline was installing over 70 miles of track on two corridors. Cegelis revealed that the rail line in north-south Florida East Coast between Cocoa and the St. Sebastian River was under “total reconstruction” being a double-tracked freight-passenger corridor. A new single set of tracks was being laid down over the east-west stretch between Cocoa and the St. Johns River. About 50 miles of double-track rail will be developed in Brevard with two structural underpasses, along with upgrades of 15 bridges and 50 crossings.

Brightline has officially completed 55% of the Orlando-Miami rail expansion as announced during a ceremony held at one of their facilities. The 170-mile expansion from the airport to South Florida will send passenger trains zipping across the Space Coast and Treasure Coast. The US$4.2 billion projects have brought about 2,000 construction jobs. It includes a US$100 154,500-square-foot higher-speed train maintenance facility, just south of Orlando International Airport that is yet to be completed. Once completed, the Boggy Creek Road maintenance facility will include a train wash, a 30-ton overhead crane to lift 30,000-pound locomotives, an 80,000-gallon biodiesel fuel farm, and 7 miles of maintenance and storage track. Work will continue on Brightline’s 48 bridges and upgrades at 155 railroad crossings.

The project is scheduled to be completed by the end of 2022. The company operates a smaller maintenance facility in West Palm Beach, but the Orlando complex is under construction across 62 acres. Granite Construction is overseeing work between Orlando International Airport and Cocoa, while HSR Constructors is the general contractor from Cocoa to West Palm Beach. In total, Brightline’s high-speed rail network will create over 10,000 jobs and over US$6.4 billion in economic impact over an eight-year period. Dignitaries used black Sharpie pens to autograph a 12-foot yellow steel rail near the podium stage.

“It’s been a challenging year for all of us. We saw our economy dip significantly. But this is a good indicator that we are going to recover quickly; the construction of the Orlando extension has employed thousands throughout the region and will continue to bring much-needed jobs to our community. We need to continue to support public and private partnerships that will improve transportation and mobility options and meet the needs of our growing population” said Orange County Mayor Jerry Demings.“This is an exciting time for our community and the entire state of Florida. Brightline is fulfilling a longtime vision to bring high-speed rail to Central Florida and providing additional transportation options for our residents and our visitors. I look forward to boarding the first Brightline train to Miami from their station at Orlando International Airport.” said Orlando Mayor Buddy Dyer.