The pre-assembly works of Unit 1’s outer containment dome are underway at the Rooppur Nuclear Power Plant construction site in the Republic of Bangladesh, with the dome expected to be installed in October of 2022. As per the recent reports, the assembling and subsequent erection work are being undertaken by experts from Trest RosSEM, a subsidiary of Russia’s Rosatom Engineering Division.

Lasting for a period of 1,151 days, the preparation, assembling, installation, and concreting of the outer containment dome is one of the longest stages in the construction of a power unit. It is said that the project’s target duration of work will be trimmed to merely 584 days. Alexey Deriy, Vice President of ASE JSC and Rooppur Nuclear Power Plant Construction Project Director, stated that the final stage of civil work in the power unit’s construction is the installation of the outer containment dome. He added that it allows for the construction of passive heat removal system structures and equipment, and it is a significant step toward the start of the physical start-up.

Rooppur Nuclear Power Plant, the first of its kind in Bangladesh, is being constructed at Rooppur/Ruppur, adjoining Paksey, in the Ishwardi Upazila of Pabna District, on the bank of the Padma River, approximately 140 kilometres west of Dhaka, northwest of the South Asian country.

The facility will be equipped by the Russian State Atomic Energy Corporation (ROSATOM) through its subsidiary JSC Atomstroyexport, with two VVER-1200 water-cooled, water-moderated power reactors of the AES-2006 / V-392M design.

Each of the reactor units comprises a reactor and four circulation loops, each of which includes circulation pipelines, a reactor coolant pump, and a horizontal steam generator. The nominal thermal power of the reactor is 3.2GW, while the maximum utilization factor is more than 90%. The time of the fuel operation cycle in the reactor is between 48 and 60 months, and the main equipment of the Rooppur Nuclear Power Plant will have a service life of more than 60 years, without the need for replacement.

The facility will also have meteorological and water gauge stations, permanent seismic stations, as well as storage and laboratory facilities.

In addition to the ROSATOM subsidiary, the Rooppur Nuclear Power Plant project also involves Inter RAO Engineering for pit excavation of the main buildings and construction and erection of facilities for the plant, and Goldenberg Group of Companies for the civil construction and pipe laying works.

Orgenergostroy carried out a comprehensive engineering survey for the plant and constructed the pilot bases and residential camps for the contractors, and TVEL Fuel Company will serve as the single-source supplier of nuclear fuel for the nuclear power project. Ground preparation work, which included excavation works, the pit water removal system, development of pit for units one and two, soil stabilization works and foundations for both reactor units, as well as the construction of amenities and office buildings, roads, security fences, and storage facilities commenced.

In July, the first concrete was poured for unit 2, and the following month, Rosatom began installing a 200-tonne core catcher as the first large piece of equipment in the reactor building of Rooppur 1, describing it as “a unique protection system”.

In December, construction personnel of TrestRosSEM LLC completed the reactor pit construction from the top of the cantilever-truss to the bottom of the floor at elevation +26.300 meters at power unit No.1. In July, the dome of the inner containment shell of unit 1 was installed. Reportedly, the metal structure has a diameter of 44 meters and a weight of 185 tonnes.

The operation was carried out by Trust RosSEM, using a Liebherr heavy crawler crane that has a lifting capacity of 1350 tonnes. The day before lifting, a special mounting traverse of 15 steel cables was installed.

The reactor pressure vessel installation work in the first reactor building began in September same year. With this, the physical work on the first unit, which has 1,200 megawatts of power generation capacity, will be completed.

All four steam generators were installed at the design position at Unit-1 of the Rooppur Nuclear Power Project (RNPP. The installation works of the steam generators at their regular position in the reactor compartment were carried out by Specialists of Energospecmontazh, a subcontracting organization of the Rosatom State Corporation Engineering Division, in accordance with the approved schedule.

The construction of physical protection system (PPS) for the Rooppur Nuclear Power Plant in Pabna began. The PPS will reportedly ensure a conducive environment for safe and secure power generation for the next 100 years. Welding of the primary circuit had started at the first unit of Bangladesh’s nuclear power facility. The welding was termed “one of the key events in the construction of a nuclear power plant” by Rosatom, Russia’s state nuclear company, which is constructing the plant. The primary circuit joins the main units of Rooppur 1, a VVER-1200 pressurized water reactor. It ensures that the heat produced by the reactor core is continuously carried to the steam generators, through the main circulation pumps. Rooppur 1’s reactor pressure vessel and four steam generators were installed in their position earlier in October and November, respectively.

Rosatom, announced the completion of the concreting works of the fifth tier of the inner containment of the reactor building at Unit 2, after 23 hours of uninterrupted efforts by the specialists of Trest Rossem to cast 850m3 of self-compacting concrete mix.

“Concreting of the fifth tier of the inner containment from elevation +38.180 to elevation+43.400 was completed ahead of schedule, ” said Alexey Deriy, the Vice President of ASE and Director of Rooppur NPP Construction Project, adding, “this is a testament of the high professional level of the specialists of Trest Rossem in Bangladesh and a good example of well-coordinated work of the entire team at the construction site.” 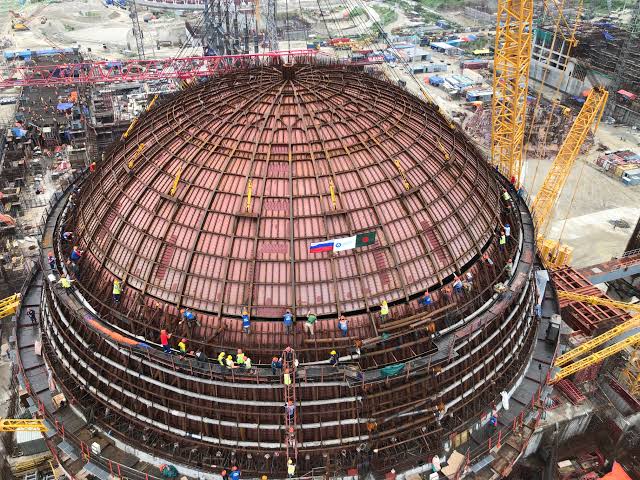 This milestone marks the completion of the construction of the cylindrical part of the inner containment- one of the main components of the NPP reactor safety system that prevents the release of radioactive substances into the environment.

The dome of the power unit, the parts of which are currently being manufactured, will be installed on it in the next phase. It is planned to complete the erection of steel structures of the inner containment dome in the first half of next year (2022).

The major concrete work on an auxiliary reactor building at Rooppur Nuclear Power Plant, popularly known as Rooppur NPP, has been completed approximately 8 months ahead of schedule owing mainly to logistic process optimization that enabled workplaces to be supplied with the necessary resources such as supplies and tools on time.

The shorter construction period allowed for cost savings, first and foremost by saving the semi-fixed portion of overhead costs and making a significant number of highly qualified labour resources available earlier than planned, who had previously been engaged in the achievement of other production tasks.

The average volume of concrete laid at the structure, which is part of the ‘Nuclear Island,’ intended to hold process instrumentation and control gear, by NIKIMT-Atomstroy professionals was 1,600 m3 per month, rather than the projected 1,000 m3.

Alexey Deriy, Vice President of ASE and Project Director for Rooppur NPP Construction, commented on the development, saying, “the pace of work accomplished by the specialists of NIKIMT-Atomstroy, while fulfilling all the stringent quality standards, demonstrates the highest potentials of Rooppur NPP construction workers.”

With such high levels of professionalism among our staff, we can confidently state that the construction of Bangladesh’s first nuclear power plant will be completed on time, despite a number of hurdles such as the COVID-19 pandemic and a challenging international situation.”