With a planned capacity installation of 80 megawatts or rather 110,000 hp, the power plant is being constructed at Rusumo Falls on the Kagera River, along Rwanda’s border with Tanzania and approximately 2 kilometers downstream of the tri-point where the two countries share a common border with Burundi.

The project mainly involves the construction of a concrete gated dam with a height of 12m and a spillway structure with three water passages equipped with three radial gates, each measuring 9m-wide and 9.5m-high.

A water intake and headrace tunnel measuring 11m-wide and 14m-high and featuring a shotcrete and rock bolts support system will also be constructed as well as a concrete-lined vertical surge shaft with a diameter of 8m and a surge chamber with a diameter of 41m. The plant will also include a 260m-long diversion canal with a width of 17m and a 250m-long tailrace canal with a width of 40m.

The project also features the construction of 220kV transmission lines from Rusumo Falls to; 1. Gitega in Burundi (161km), 2. Nyakanazi in Tanzania (98km) and 3. Shango and Bugesera in Rwanda (119km).

Electricity generated from the Rusumo Hydroelectric Power Plant when completed will be equally shared among the three East African countries, each benefiting from approximately 26MW directly connected to the national grid through the above-mentioned power lines.

In September 2013, the Regional Rusumo Falls Project – Council of Ministers (COM) signed the Shareholders Agreement and the Implementation Agreement in Bukoba, Tanzania. This paved way for the implementation of project activities beginning with resettlement and compensation process. 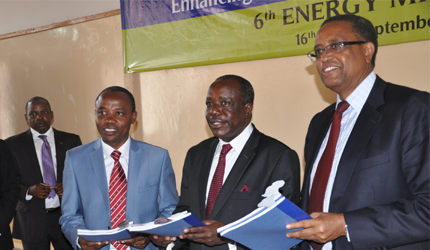 In November 2016, two contracts were signed in Kigali, Rwanda. The first contract, which concerned the implementation of civil works, including supply and installation of hydro-mechanical equipment, was signed between Rusumo Power Company Limited and a consortium of contractors that included a joint venture composed of CGCOC Group Limited and Jiangxi Water & Hydropower Construction Company Limited.

The second contract was signed between Rusumo Power Company Limited and a consortium of companies, including Andritz Hydro GmbH of Germany and Andritz Hydro PVT Limited of India, to carry out mechanical and electrical works for power generation.

On 30 March 2017, the ground-breaking ceremony for the project was held at Ngara, in Tanzanian territory.

As of February 2019, the entire project was 35% complete, 47% complete by July, and 50 % complete in October of the same year. This was based on the overall work done by the Civil Contractor and Electromechanical Contractor particularly within the intake structure, spillway structure, HRT works, powerhouse construction and hydro-mechanical design, equipment, and installations. 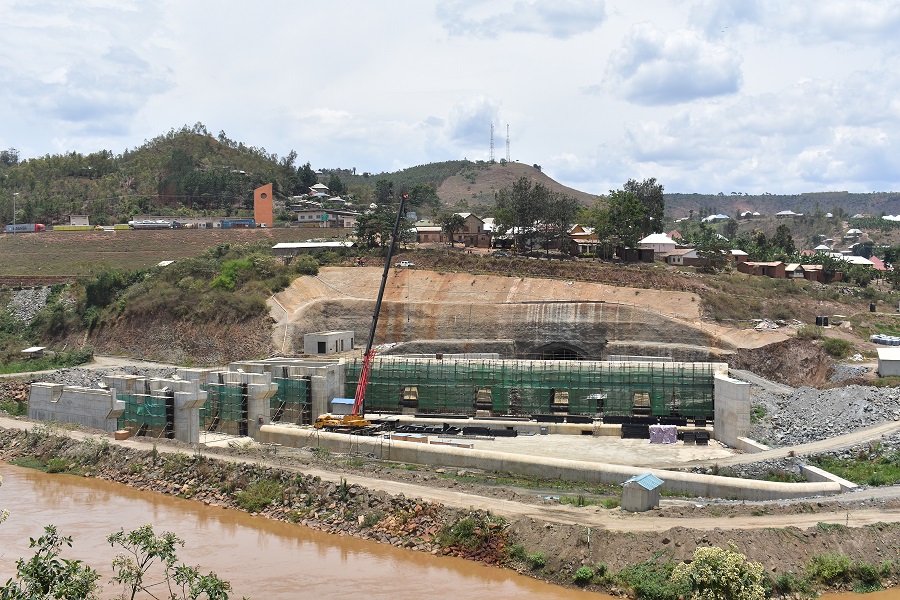 In March 2020 the project was reportedly 62 % complete for both CP1 (Civil Contractor) and CP2 (Electromechanical Contractor). The Powerhouse area construction was being readied to accept water passage steel and a temporary tailrace wall and ramp construction were underway – aiding in steel liner installations.

The Headrace Tunnel (HRT) works including full-scale drilling and blasting and pilot blast had been completed and the Switchyard concreting for gantry tower and shunt reactor bases continued as well as installations of tower anchor.

Construction of permanent residential buildings at the Powerhouse had been fully completed.

In June 2020 with permanent diversion of the water through the spillway structure with the power intake stop logs securely in position, protecting the headrace tunnel from flowing river conditions, and three out of four spillway radial gates locked open, water could safely move downriver. 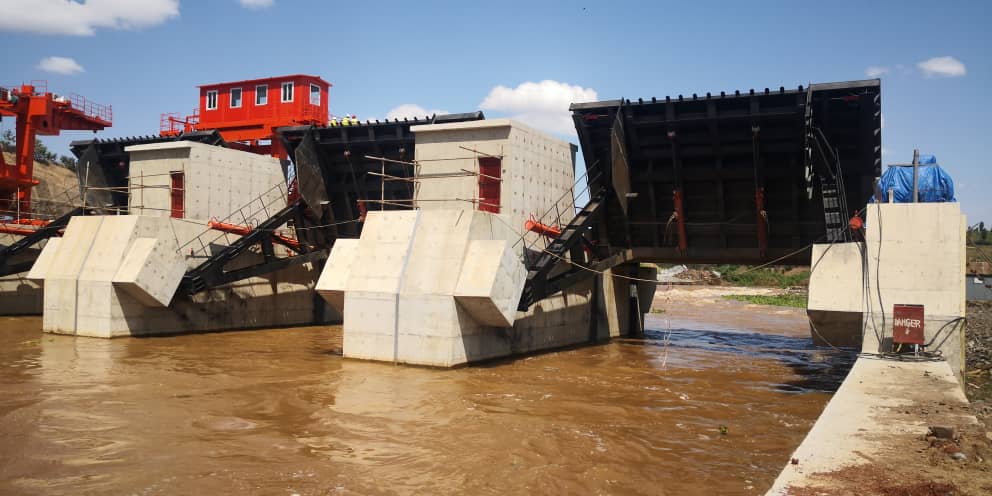 The second phase of cofferdam construction begun the same month driving the closure from Tanzania towards Rwanda, upon which a second smaller cofferdam was constructed, thereby blocking river waters from entering the dry construction area where a short and a long gravity dam, and the fourth spillway bay would be constructed.

As of February 2021, the overall progress of the project was 73.3%. The CP1 civil contractor continued working inside the phase two cofferdam with the dam now at crest level, and work continued within the 4th spillway bay.

Excavation of tunnel header was progressing with only 96 meters remaining until the header is open completely from end to end of the HRT. Works were also advancing at the administration building, residential camp, and switchyard.

The CP2 contractor on the other hand continued to work in the powerhouse with the assembly of water passage steel in Units 1 and 2, and overhead traveling crane installation within the service bay. Original gantry tower and beam work at the switchyard was 100% completed at the time. 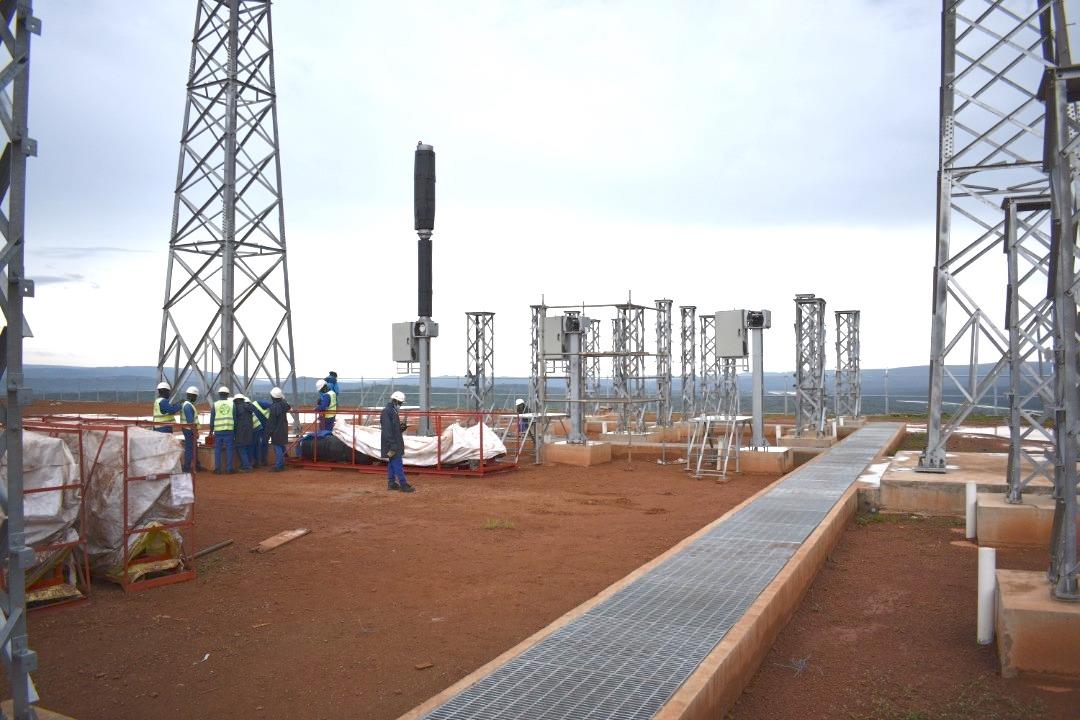 In June 2021, the overall Project implementation status had hit 80% with a target of 1st power (one unit) planned for December 2021. The dam was planned to be wet in September 2021.

At the time, the civil contractor was expected to complete his work in February 2022 with site restoration and cleaning to follow into 2022. The electromechanical contractor on the other hand had achieved 74% progress.

NELSAP and RPCL Management welcomed the delegation and escorted them to to the power intake and dam and exhibited the powerhouse. After the tour, the committee expressed satisfaction with the progress made so far (87 percent) in the overall execution of the project.