The installation of wind turbines at Hollandse Kust Zuid (HKZ), the largest offshore wind farm in the world is reportedly halfway complete. The report was revealed by offshore wind developer Vattenfall, led by its Senior WTG Installation Package Manager for HKZ Søren Andersen.

Andersen said, “We’re halfway towards having constructed the world’s first offshore wind farm that is entirely built without subsidies. This is a major milestone we can all be very proud of.”

Cadeler, a Danish offshore wind installation firm has been installing wind turbines at HKZ. The company is carrying out the works using the Wind Osprey jack-up vessel. The crew working on the installation vessel started back in April this year. Senior WTG Installation Package Manager for HKZ at Vattenfall said that a lot of credit must go to the installation team. This he explained is because they have stayed on course and delivered the work, despite the challenges they may face. These challenges include the COVID-19 pandemic, unfavorable weather conditions, and prolonged working hours and shifts.

Hollandse Kust Zuid Wind Farm (HKZ) is an offshore wind farm that is under construction since 2021 on an approximately 235.8km² piece of land located about 18 kilometers off the coast of the Netherlands, in the area between The Hague and Zandvoort.

Dubbed “the Hollandse Kust (zuid) Wind Farm Zone (HKZWFZ)” the land is subdivided into four sites. Sites I and II cover a total area of approximately 115km², while sites III and IV span across 110km².

The wind farm is being developed by Vattenfall, a Swedish multinational power company owned by the Swedish State, at a cost of US$ 1.6bn and on a subsidy-free basis making the Hollandse Kust Zuid Wind Farm the first subsidy-free wind farm in Europe. 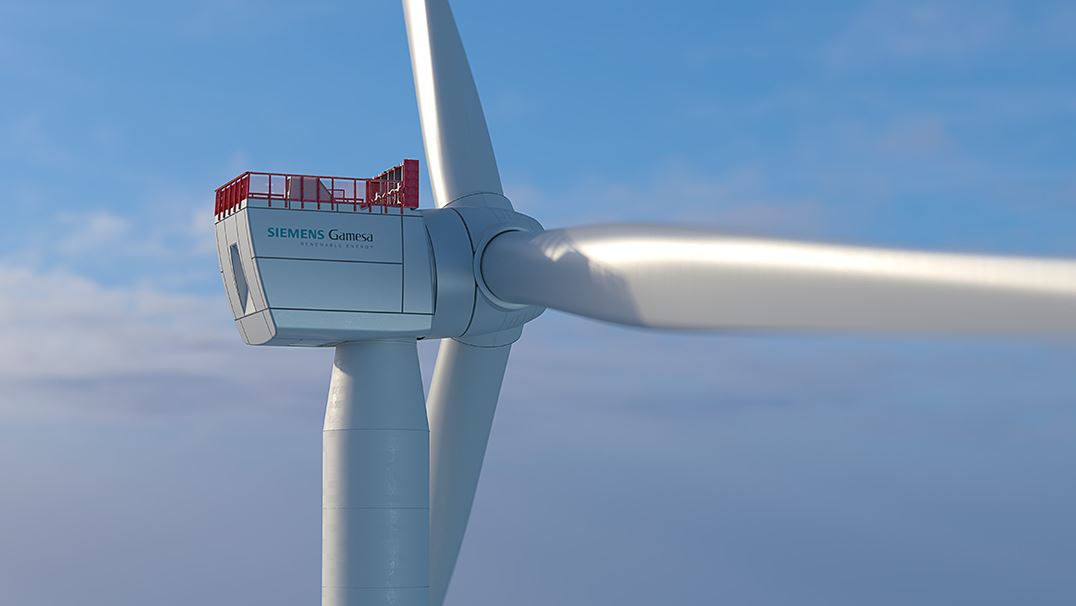 A total of 140 units of the new SG 10.0-193 DD offshore wind turbines, featuring Integral Blade manufacturing and direct-drive technologies will be installed at the sites. The turbines, manufactured by Siemens Gamesa, have a rotor diameter of 193m, a blade length of 94m, a swept area of 29,300m², and a rated power of 10MW.

Upon completion, approximately in 2023, the Hollandse Kust Zuid Wind Farm will have a total generation capacity of 1.5MW. It will be the largest offshore wind farm in the Netherlands and the second largest in the world after the Dogger Bank Wind Farm which is under construction 125 to 290 kilometers in the North Sea, off the east coast of Yorkshire, England.

Dogger Bank Wind Farm is being developed by the Forewind consortium in two phases, Creyke Beck A and B is the first phase, and Teesside A and B is the second. Upon completion, the firm will have a total of four offshore wind farms, each with a capacity of up to 1.2 GW, for a combined capacity of 4.8 GW.

At the substations, the power will be stepped up to 220kV and then transmitted onshore through two 220kV cables to the existing onshore 380kV Maasvlakte high-voltage substation, before being connected further to the south ring of the TenneT-operated Randstad 380kV line and then to the national high-voltage network for distribution. 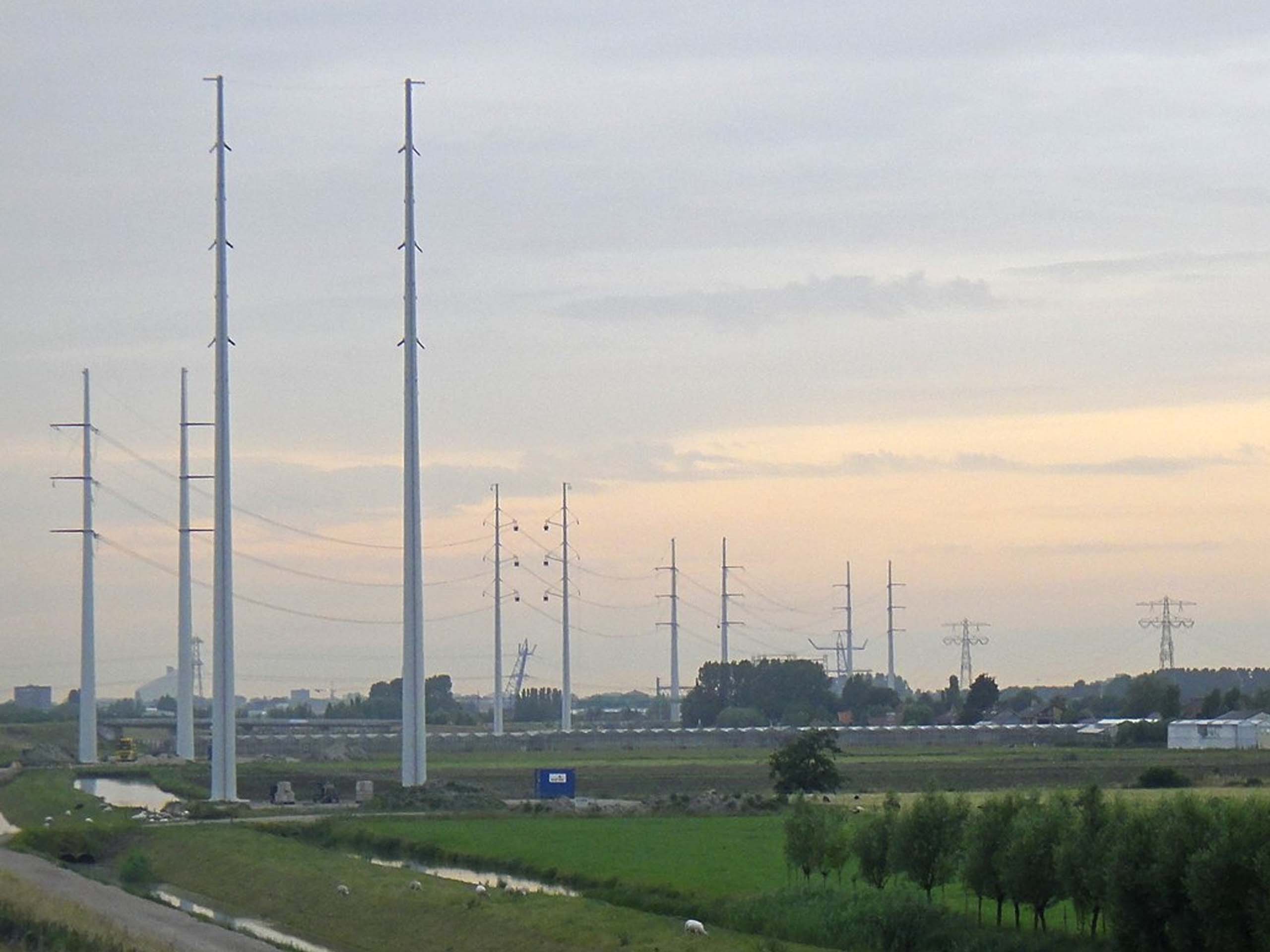 TenneT is a leading European electricity transmission system operator (TSO), with activities in the Netherlands and Germany, and it will be responsible for the development and operation of the transmission infrastructure of the Hollandse Kust Zuid Wind Farm.

The Netherlands Government awarded a tender for the construction and operation of the first two parcels of Hollandse Kust Zuid Wind Farm (Zone Sites I and II) to Chinook CV, a subsidiary of Vattenfall.

Vattenfall received permits for the construction and operation of Hollandse Kust Zuid I and II offshore wind farms from the Dutch Minister of Economic Affairs and Climate Policy.

A consortium of Van Oord and Hellenic Cables was selected by TenneT to supply and install cables for the Hollandse Kust Alpha and Beta transmission projects.

March 2019: The initial preparatory works for the first two parcels of the Hollandse Kust Zuid Wind Farm (Zone Sites I and II) began.

Vattenfall selected Seaway 7 to transport and install a total of 76 monopile foundations and infield cables for zone sites I and II. 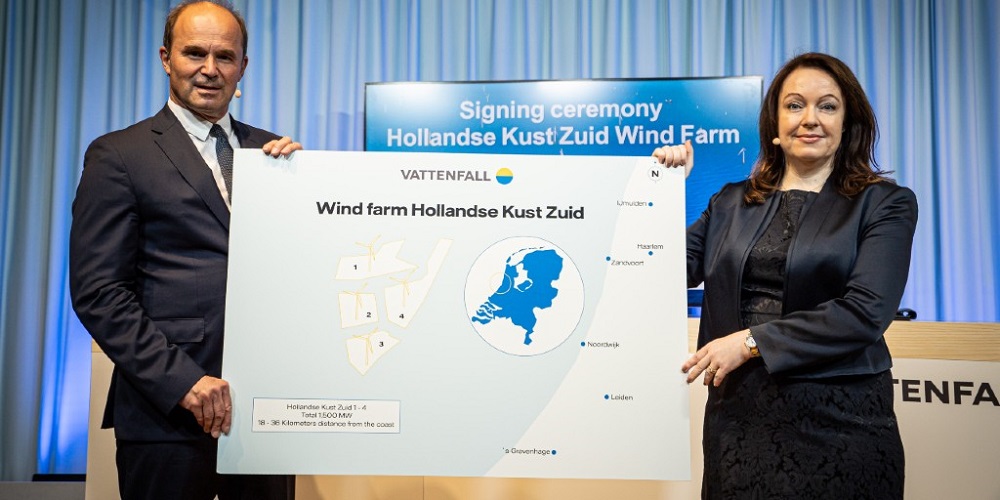 Vattenfall took the final investment decision on the wind farm and agreed to sell a 49.5% stake in the Hollandse Kust Zuid Wind Farm to BASF, a German chemicals company, for a consideration of US$ 353M.

Air Liquide, a French industrial gas producer, entered into a 15-year power purchase agreement (PPA) to off-take 100GWh of clean energy generated by the wind farm to power its factories in the Netherlands.

8.2 Consulting had already carried out the supervision of the pre-serial production of five units manufactured in Brande, Denmark, which had been going on for almost a year until the end of July.

The Hollandse Kust (zuid) Alpha platform’s offshore transformer station was successfully installed on the jacket in the North Sea, approximately 20 kilometers off the coast of The Hague. 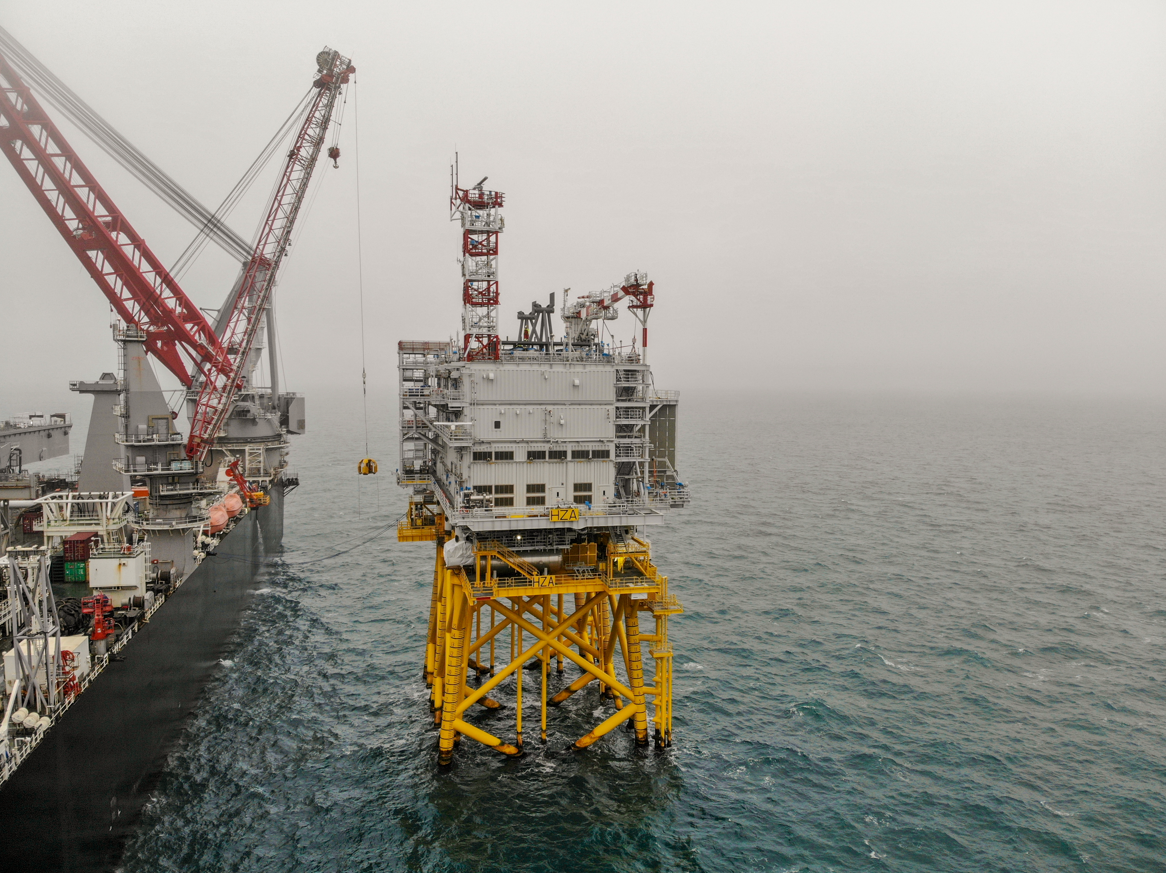 The transformer station, also called the topside, is one of the two topsides of the Hollandse Kust (zuid) offshore grid that will connect the offshore wind farm area with the same name to the Dutch onshore high-voltage grid.

The contract includes complete mechanical and electrical pre-assembly work for 140 Siemens Gamesa 11 MW wind turbines, including all crane and lifting operations as well as ground transportation of nacelles, blades, and towers for each phase of the project.

The pre-assembly work, which will take place at the Port of Rotterdam, is scheduled to begin in January 2022.

The Hollandse Kust Zuid Wind Farm which when completed will be the second-largest offshore wind farm is to receive the first serially-manufactured SG 11.0-200 DD nacelle that left the Siemens Gamesa factory. The factory has been converted and upgraded for the new product generation over several months since the summer.

Speaking on this milestone, Anton Bak, Siemens Gamesa’s plant manager in Cuxhaven said, “Rolling out the first serially-manufactured SG 11.0-200 DD is a terrific start to the year, but I am very proud that we managed to stay on schedule and carried out a smooth product changeover at the plant despite the adversities of the COVID-19 pandemic.”

Compared to the predecessor model, the annual energy production of the SG 11.0-200 DD gearless direct-drive model is increased by up to 40 percent and the turbines have an output of 11 MW.

The top side of the second offshore transformer platform built to supply Vattenfall’s Hollandse Kust Zuid offshore wind farm in the Dutch North Sea has been installed by Dutch grid operator TenneT.

Tennet had Allseas install the 3,950 t Hollandse Kust Zuid Beta topside on a previously installed jacket following the installation of the first transformer platform, the Hollandse Kust Zuid Alpha, in December 2021. On a foggy Monday in the North Sea off Scheveningen, Allseas utilized its massive Pioneering Spirit installation vessel to lift and install the topside, which had just arrived from Dubai.

Interestingly, the project had a fright in February when a drifting bulker damaged the jacket in heavy weather, barely a month before the intended topside installation. However, a second assessment by TenneT revealed that the jacket had only minor damage and that it was safe to attach the topside, preventing any potential delays. It was recognized that a total loss, which fortunately did not occur, would have resulted in a protracted project delay and significant additional expenditures.

“TenneT completed the offshore grid link installation and energization. Vattenfall, the developer of wind farms, can now link the wind turbines to the high voltage grid,” said TenneT in a statement.  “With the energization of the Hollandse Kust (zuid) Alpha link, the offshore grid that TenneT is creating in the North Sea is starting to take shape,” added Marco Kuijpers, Director of Large Projects Offshore.

Installation of turbines for the 1,4 GW offshore wind farm

The platforms are part of the grid link that connects the offshore wind farm zone to the Dutch mainland at the Maasvlakte. The Hollandse Kust Zuid (HKZ) wind farm zone is located 20 kilometers off the coast of the Dutch province of Zuid-Holland and encompasses an area of 235.8 km2.

The platforms will convert the voltage of the electricity generated by the wind turbines from 66 kV to 220 kV and transport it to shore via subsea cables to an electrical substation at the Maasvlakte. TenneT stated that the voltage is converted to 380 kV at this substation. Finally, the electricity is delivered to the high voltage grid via the Randstad 380 kV Zuidring high voltage station. It was revealed that the installation of turbines for a 1,4 GW offshore wind farm project is set to begin in the coming weeks.

During a press tour hosted by TenneT, where members of the media, were able to sail around the two platforms aboard Chevalier Floatel’s DP Galyna, multiple transition pieces were installed on monopile foundations and ready to host Siemens Gamesa’s powerful 11MW wind turbines. Construction on what will be the world’s largest wind farm once operational is being completed in stages. The first phase, according to Vattenfall’s annual report, began in 2021 with the installation of the first 34 monopiles. The installation of the remaining 106 monopiles began in March 2022, as part of the second phase.

Petrofac was in charge of the engineering, procurement, construction, and offshore installation of the HKZ Alpha and HKZ Beta platforms, as previously stated. “The safe installation of the Beta topside is a critical milestone in the delivery of this important energy transition project,” stated Petrofac CEO Sami Iskander. “Everyone engaged should be proud of what they have accomplished.”

Kuijpers of TenneT remarked, “I am very delighted that the project was installed securely, and I congratulate Petrofac and Allseas on this.” Wind energy is critical in the energy transition, as well as in industry, and I am happy that TenneT, in collaboration with our partners, can contribute to a more sustainable future in this way.” Hollandse Kust Zuid, regarded as the world’s first subsidy-free wind farm region, is expected to generate enough electricity to supply more than two million households once completely operational in 2023, according to TenneT.