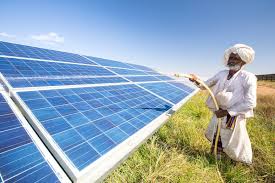 India is continuing on its venture to increase the country’s use of renewable energy as it invests in the worlds largest solar project bid and slowly phases out on the use of non-renewable energy sources such as coal. It’s most recent undertaking is from a company named Adani Green Energy, a branch of Adani Group, who won a bid for the worlds largest solar project to construct various PV solar power projects that will produce a total of 8GW of power. The company, Adani Green Energy, has pledged to invest nearly US$ 6 billion into the project that is going to create nearly half a million new jobs both directly and indirectly.

Currently, India relies on importation of 90% of the total solar equipment that it uses and these projects are projected to ease the importation burden it has. Adani Group is also committed to having another branch, Adani solar, to establish an additional 2GW solar cell and module manufacturing capacity. According to a projection report, these projects are expected to reduce the carbon dioxide emissions from non-renewable plants by 900 million tons over the period of the projects’ function time. The project will be in a variety of locations, including a 2 GW single-site generation project, the company said.

So far, Adani Solar, Waaree Energies and Risen Energy were the top three suppliers of solar modules in India in terms of shipments as of 2019, according to Mercom India. The three PV companies accounted for approximately 25% of the total market share, according to findings released in Mercom India Research’s latest report, India Solar Market Leaderboard 2020. Along with Adani Green Energy’s already existing 1.3 GW of manufacturing capacity, the new contract, according to reports, will further consolidate the group’s position as India’s largest solar module producing facility. It will, in fact, take Adani Green Energy much closer to their goal of achieving an installed generation capacity of 25 GW of renewable power by 2025, which will see it committing a total investment of U.S. $15 billion in the renewable energy space over the next five years.