Padma Multipurpose Bridge project timeline and all you need to know The Padma Multipurpose Bridge is a road-rail bridge that is being constructed across Padma or Podda, which is a major river in Bangladesh and Indi, and the main distributary of the Ganges or Ganga River, to connect Louhajong, Munshiganj to Shariatpur and Madaripur, linking the south-west region of the South Asian country, to northern and eastern regions.

Designed by a team that included experts from Northwest Hydraulic Consultants, SMEC International, ACE Consultants, Aas Jakobsen, and HR Wallingford, led by Maunsell AECOM, the New Zealand subsidiary business of AECOM, the bridge is considered to be the most challenging construction project in the history of Bangladesh.

It is an approximately 6.15km long and 21.1m wide double deck composite steel truss structure with a total of 41 piers of a length of 150m. The upper deck of the bridge will carry a four-lane highway, while the lower deck will have a rail line that is planned for construction in the future, a gas transmission pipeline, an optic-fiber cable, and power transmission lines. The Padma Bridge design aligns with the “displacement-based approach” for seismic resilience and implements seismic isolation between the superstructure girder and the pier-and-foundation system. This approach enables the principal bridge components to move relative to one another in case of earthquakes, thereby dissipating the large forces.

Friction pendulum bearings are used to permit large relative displacements between the bridge superstructure and the bridge piers.

The detailed design of the project was given the 2010 award for the Best Safeguard Planning System by the Asian Development Bank (ADB), an international development finance institution whose mission is to help its developing member countries to reduce poverty and improve the quality of life of their people.

Upon completion, the Padma Bridge will be the longest bridge in Bangladesh and the longest over the Ganges river in terms of span and total length. It will also be a landmark structure and one of the longest river crossings in the entire world.

Apart from the bridge, the project also includes the construction of 15.1km of approach roads, 2.3km of which are on the Mawa side and 12.8km on the Janjira side, toll plazas, and facilities for dredging and riverbank protection.

In April, the Government of Bangladesh initiated the process of shortlisting the contractors for the bridge construction.

In October the World Bank funding for the project was suspended and later on withdrawn, following which the Government of Bangladesh decided to fund the project from its own fund. 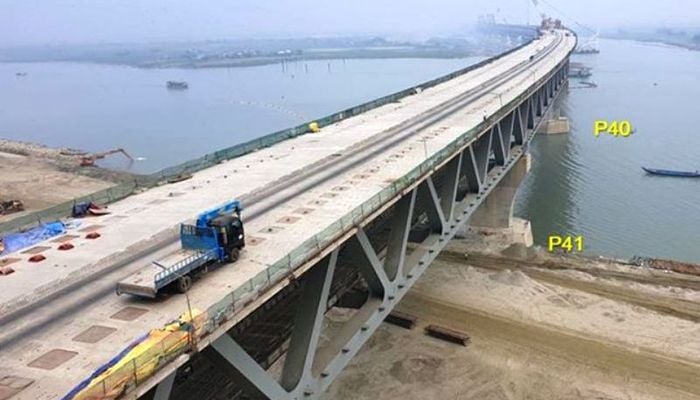 In June, the company was awarded the project’s construction contract.

In October, more than one and a half years after the main construction work began, the first span was installed between pillars 37 and 38.

In late November, the construction of all the 42 pillars was completed.

The final (41st) span of the bridge was installed in December.

In August, the last road slab was installed on the span, which linked pillars 12 and 13. 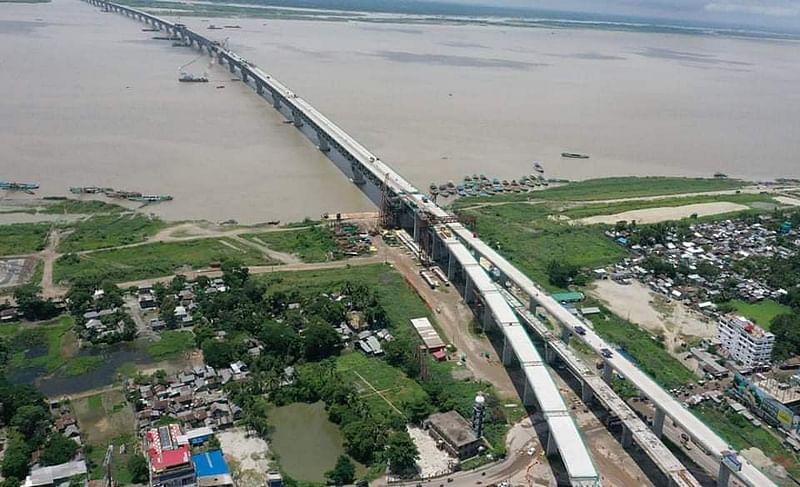 In September, while virtually attending a Doa mahfil and Quran distribution program to mark Prime Minister Sheikh Hasina’s 75th birthday at Naria Upazila in Shariatpur district, the Road Transport and Bridges Minister Obaidul Quader announced that the Padma Bridge will be opened for vehicular movement before June next year (2022).

According to Quader, Sheikh Hasina will inaugurate the much-cherished bridge.

In October, the Road Transport and Bridges Minister and Awami League General Secretary Obaidul Quader announced that the carpeting work on the main structure of the Bridge would begin in the first week of November.