With Angelique International Limited of India as the engineering, procurement, and construction (EPC) contractor, the Kabu 16 hydroelectric power station project scope would include the construction of a concrete and rock-fill dam, with a hydraulic head (water drop) of 191 meters.

As part of the project, two vertical Francis turbines supplied by Voith, the German industrial machinery manufacturer, would also be installed. The turbines have a capacity of 10 megawatts each. Other works would include the construction of the project’s staff housing, an electric switchyard, electricity transmission lines, and access roads to the site.

The Kabu 16 hydroelectric power station project was expected to be completed by March 2022. 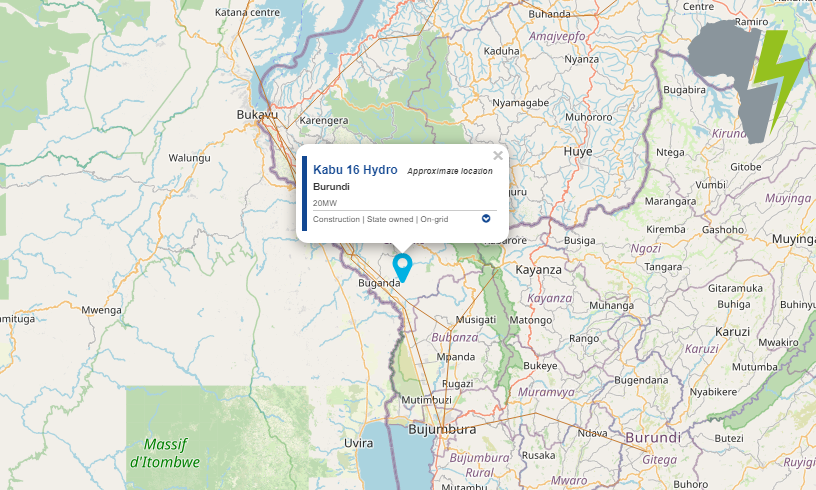 Burundi aims to start works on the construction of a US$ 60m hydroelectric power station that will reinforce the energy sector in the country. The power plant- Kagu 006 hydroelectric plant’s location is in Cibitote, five kilometers from Bujumbura town. The project is a result of a public and private partnership project (PPP).

“The development will be a hydroelectric power plant with a water facility having a capacity of 12 MW. The plant strives for a 45-50 GWH1 of energy yield, yearly production; which is equivalent to 80-90% of Rwegura’s production,” said the Minister of Energy and Mines, Côme Manirakiza.

Mr. Manirakiza further expressed his gratitude to all the partners, including the European Union, World Bank, African Development Bank, the Republic of China, the Netherlands, the United Nations Development Program, and the European Investment Bank, for their support towards the construction program of the power plant.

In Africa, Burundi is ranked among other countries with the lowest electricity per capita.

In May 2022, it was announced that the completion date of the Kabu 16 hydroelectric power station project was pushed back to June 2022. On 2nd March the government granted a 15-month contract extension to Angelique International. This was because of the interruptions brought about by Covid-19-related restrictions, flooding of the site, and land rights issues.

These interruptions were confirmed by Prime Minister Alain-Guillaume Bunyoni, during his site visit earlier that year. A spokesperson for German project equipment supplier Voith seconded the minister saying that especially the Covid-19-related restrictions interrupted essential tasks including the inspection of Kabu 16 hydroelectric power station project components.