Mambilla Hydropower Project is a 3.05GW hydroelectric facility that is set for development on the Dongo River near Baruf in Kakara Village of the Taraba State, Nigeria.

The project entails the construction of four dams and two underground powerhouses with 12 turbine generator units in total. The four dams will be known as Nya-formerly Gembu, Sumsum, Nghu, and Api Weir. The Nya and Sumsum will be 100m and 35m-tall roller compacted concrete (RCC) dams with crest lengths of 515m and 460m, respectively, while the Nghu and the Api Weir will be a 95m-high rockfill dam with a crest length of 650m and a small regulatory dam to raise the water level of the river in that order.

Regarding the underground powerhouses, each will measure 175mx27mx38m and will house six 250MW Pellton turbine units operating at a total dynamic head of 1,007m. The diameter of the power shafts connecting each turbine will range somewhere between 5.25m and 8.40m.

The headrace canal for the plant will be 3.1km-long and 15m-wide while its two 6km-long tailrace tunnels will be 8m in diameter each, and the tailrace canal will be 3km-long and 25m-wide. 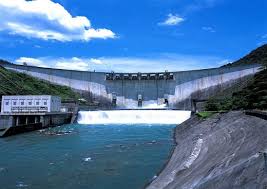 With a planned generating capacity of 3,050 megawatts (4,090,000 hp), the Mambilla Hydropower Plant is expected to be the largest power-generating installation in Nigeria, and one of the largest hydroelectric power stations in the entire African continent.

The US$ 5.8bn Mambilla Hydropower Project is developed by Nigeria’s Federal Ministry of Power, Construction, and Housing. The Chinese Export-Import (Exim) Bank is funding 85% of the total estimated project cost, while the Federal Government of Nigeria is providing the remaining 15%.

Although Mambilla hydroelectric project was originally conceived in 1972, it only made significant progress after 35 years when China’s Gezhouba Group awarded a contract to develop the project with 2,600MW installed capacity in 2007.

In August, the ground survey for the project was completed

The environmental approval was received in December.

The capacity of the project was increased from the initial 2,600MW to 3,050MW. In August, the Nigerian Federal Ministry of Power Works and Housing awarded the engineering, procurement, and construction (EPC) contract for the project to a consortium made of Sinohydro Corp., a Chinese state-owned hydropower engineering and construction company, China Gezhouba Group Co., and China Geo-Engineering Corp.

In November, there were attempts to start the construction works, however, due to various constraints, including landslides, and a lawsuit that had been filed at the International Court of Arbitration by Sunrise Power and Transmission Company (SPTCL) Limited, a Nigerian company that lost out on a contract to implement the multi-billion-dollar project, the project stalled again.

In February there were fresh attempts to resume construction after the government agreed to pay the SPTCL Company US$ 200M for breach of contract so as to drop any claims relating to the project.

In May, SPTCL filed another complaint with the International Chamber of Commerce in Paris, after the West African country government failed to pay the former as agreed, delaying the start of the project further.

Sunrise Power Transmission Company of Nigeria Ltd (SPTCL) agreed to waive the US$ 500M penalty fee incurred by the federal government over multiple defaults of a US$ 200M settlement agreement on the Mambilla hydroelectric power project in Taraba state and to discontinue the arbitral proceedings in France.