Construction on the Bogotá Metro line project in Columbia, which has suffered several disruptions since its groundbreaking in late 2021 is now picking up speed, in the hopes of improving urban mobility and easing the poor traffic situation in the highly congested city of Bogota. This is one of the largest infrastructural developments in the region, which will bring the first metro line to Columbia.

The contract to begin the initial construction phase of the Bogotá Metro line project was signed in November 2019 by EMB (Empresa Metro de Bogotá) and APCA Transmimetro; a Chinese consortium, consisting of China Harbour Engineering Company Limited and Xi’an Metro Company Limited, a minority partner. Unfortunately, the metro line project couldn’t start immediately and its progress was stalled due to the Covid pandemic and a wave of protests in Columbia.

The Bogotá Metro line project eventually commenced work in August 2021, with the inauguration of a trainyard to house the first 30 metro line trains and afterward, the groundbreaking for the actual train track took place in the following month. EMB also announced recently that the trainyard project is now at 16% completion and the company. Phase I of the Bogotá Metro line project covers the development of a 24-kilometer rail extension, which will transport 72,000 passengers per hour from either direction. In addition, an underpass will be built at the intersection of Calle 72 and Caracas Avenue, to help reduce the traffic during the construction phase of the mainline.

Phase II will involve the construction of 16 stations, and the main viaduct, along with some complementary Transmilenio infrastructure, which will include a pedestrian underpass at Calle 13 and two bridges on Avenue 68. While the third phase will involve mostly testing. The entire project is scheduled for completion by 2028.

Jose Stalin Rojas, director of the Observatory of Logistics, Mobility, and Territory at the National University of Colombia, pointed out that the Bogotá Metro line project would ease the congestion issues in Bogotá; a city which is among the fifth most populated regions in Latin America. The new metro line is expected to cut down travel time by half and complement the Transmilenio Rapid Bus system in Bogotá, which currently bears the main load of the city’s public transportation system.

Jose Stalin further explained that the Bogotá Metro line project would impact the economy by creating employment opportunities, and promoting the production of cement chains and national steel. A report from Semana magazine also stated that about 17,000 direct and indirect jobs will be created from this project.

Metro De Bogotá is a US$ 3.6bn mass rapid transit (MRT) project under construction in Bogotá, the capital of Colombia, South America, from Portal Américas to Calle 127.

The project is set to be executed in three phases, the first of which will involve the construction of line one of the MRT. This line extends from Portal de las Américas to Avenida Caracas, connecting Avenida Villavicencio, Primero de Mayo Avenue, Calle 8 Sur and Calle 1. It then takes a north turn on Caracas Avenue to 78th street.

The 25km-long elevated metro line will be constructed on a U-shaped viaduct, and at a height of 13.5 meters. The project also includes the installation of viaduct systems, rolling stock, rails, telecommunications, electrical, control, and 22km of bike lanes as well as the intervention of certain sections of the TransMilenio bus rapid transit (BRT) system, improvements to 600,000m² of public spaces for pedestrian use, civil works and construction of 16 stations, ten of which will be integrated with the BRT stations of the TransMilenio network.

The average distance between each station is expected to be 1.39 kilometers.

The second phase of the Metro De Bogotá project will go through Caracas Av. from Calle 1 up to Calle 72, and the third phase would go from Calle 72 up to Calle 127. The construction phases are expected to be completed by 2025, 2030, and 2050 respectively. Systra Group conducted the preliminary studies of the metro line while CRRC Changchun Railway Vehicles was awarded a contract to supply 210 GoA4 driver-less subway vehicles and to maintain them for a period of 20 years.

The project is co-funded by the capital city and the national government with the help of multilateral banks and institutions including the World Banks International Bank for Reconstruction and Development, the European Investment Bank (EIB), and the Inter-American Development Bank (IDB).

The preliminary design phase of the Bogota metro line was completed.

In January, President Santos signed the CONPES document that would set the financing of the project and in November this same year, the co-financing agreement was approved by the Superior Council of Fiscal Politics (CONFIS).

The requisites to participate in the public tender for the metro were published in October 2018.

In October APCA Transmimetro was selected as the preferred bidder and in November the same year, the Metro de Bogotá Company signed with APCA a US$ 5.16bn contract to design, build, operate, and maintain Line 1 of the Bogota Metro. 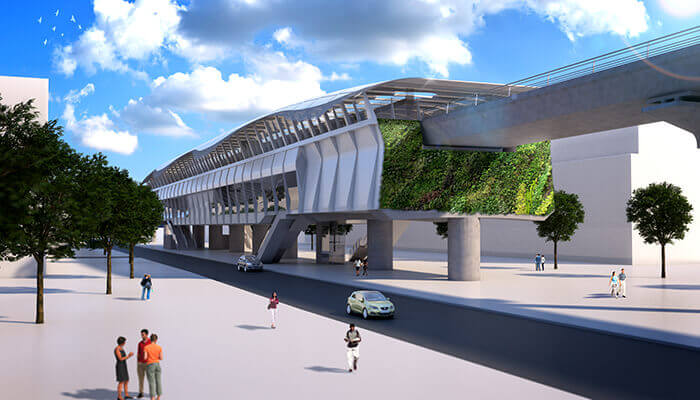 In January Bogotá’s mayor, Claudia López announced studies with Findeter to extend the line up to Calle 100, in order to connect it with TransMilenio. In August the same year, the audit consortium was selected and in October, an order was placed with CRRC Changchun Railway Vehicles for 30 driverless trains for the system.

The preliminary phase of the Bogotá Metro First Line project began on October 20, 2020.

In December, the city hall announced the second line of the metro, from Calle 72 station, westwards through Calle 72, Cali Av., Suba Av. and ALO Av. ending in Suba district.

Bancolombia and BBVA co-structured and signed an approximately US$ 175M loan agreement to finance (on 50-50 basis) the preliminary works of the first line of the Bogotá metro, which is a 24-kilometer viaduct stretching from the Bosa sector, in the southwestern part of Bogotá, to Calle 72 with Avenida Caracas. This phase has a total of 16 stations, 10 of which will be integrated with Transmilenio.

The works in question include the completion of the studies and detailed designs of the line, the execution of works to adapt the lands of the workshop yard, and the initial works of the road interchange on Calle 72, among others.