The African FLNG Project has now attained the construction of 21 concrete caissons; the works have been completed this month. This project is a part of BP’s Greater Tortue Ahmeyim LNG project. The GTA project aims to make use of two natural gas reserves; Ahmeyim and Tortue. The reserves are spread over 33,000 km², with a combined amount of 15 trillion cubic feet of gas.

The African FLNG Project is located on the maritime boundary of Senegal and Mauritania, approximately 110 kilometers from the city of St. Louis. This breakwater is considered vital because it will protect GTA’s key infrastructure- a floating LNG vessel as well as utilities and accommodation platforms from Atlantic ocean swells.

READ ALSO: Construction of 10,000bpd refinery in Uturogu, to be completed in 2023

At a purpose-built site in Dakar, France’s Eiffage Civil Marine built all the caissons. The structures have been towed to a deep-water holding site right off Goree Island. As of the first week of February, 16 of the caissons had already been installed offshore. Each of the caissons weighs well over 16,200 tonnes and measure 55 meters long, 28 meters in width, and 32 meters in height. The project’s construction called for the production of well over 130,000 cubic meters of concrete, 30, 000 tonnes of steel were also needed. Effiage revealed that the construction of The African FLNG Project’s activities involved about 1700 people, 97% being of Senegalese nationality. Effinger is now planning to build a gas transfer platform for the GTA. The first phase of the GTA scheme will involve deep-water subsea wells. These wells will be sending liquids and gas to a floating production, offloading, and storage unit moored on the continental shelf. Liquids will then be offloaded onto shuttle tankers, with the gas piped to Golar LNG’s 2.5 million tonnes per annum floating liquefaction unit for subsequent export(s).

Developed by BP, Kosmos Energy, Societe des Petroles du Senegal (Petrosen), and Societe Mauritanienne des Hydrocarbures (SMHPM) with BP as the operator, Greater Tortue Ahmeyim is an offshore liquefied natural gas (LNG) project that is being developed on the maritime border of Mauritania and Senegal.

The Greater Tortue Ahmeyim (GTA) LNG project is being implemented in phases. In the first phase, which commenced back in 2019, the GTA LNG project will be developed with a deepwater subsea production system comprising four gas production wells tied back to a floating production, storage, and offloading (FPSO) unit.

The gas will be processed for the removal of heavier hydrocarbon components on the FPSO, after which it will be transported via a new 100km-subsea pipeline to a near-shore Floating Liquefied Natural Gas (FLNG) vessel dubbed Gimi.

The Gimi FLNG will be capable of producing 2.5Mtpa of LNG a year for global export while the remaining gas will be sent through pipelines to Mauritania and Senegal gas markets, for domestic consumption.

Also Read: Nigeria LNG Train 7 project timeline and all you need to know

This phase is expected to start commercial production in 2022 with a capacity of 2.5Mtpa of LNG. BP Gas Marketing will off-take the entire LNG output from the Greater Tortue Ahmeyim phase one development.

The entire Greater Tortue Ahmeyim LNG project is expected to produce up to 10 million tonnes of LNG a year (Mtpa) when operational.

Tortue 1 discovery well was drilled up to a total depth of 5,250m. Drilled by the Atwood Achiever drillship, the Tortue 1 well encountered 117m of net gas pay.

The Ahmeyim-2 discovery well was drilled to a total depth of 5,200m. Guembeul-1 was also drilled in the same year. Ahmeyim-2 encountered 78m of net gas pay while the Guembeul-1 encountered 101m.

In December, BP entered into a partnership agreement with Kosmos Energy to co-develop the gas fields.

In October, CH2M HILL was sub-contracted by KBR for the civil and marine engineering services of the Greater Tortue Ahmeyim LNG project.

In February, the government of Mauritania and that of Senegal signed an inter-government co-operation agreement to develop the cross-border Greater Tortue Ahmeyim offshore gas field. Spread over 33,000km², the field is estimated to contain approximately 15 trillion cubic feet (tcf) of recoverable gas reserves.

In April, a front-end engineering and design (FEED) contract for the Greater Tortue Ahmeyim (GTA) LNG project’s FPSO was awarded to TechnipFMC.

In the same month, Eiffage Génie Civil Marine in a consortium with Saipem was awarded the FEED contract for the near-shore terminal of the project.

In October, KBR was awarded a FEED contract for facilities integration as well as for the terminal quarters and utilities management for the near-shore terminal.

In February, BP signed a 20-year lease and operate agreement (LOA) for the Greater Tortue Ahmeyim FLNG unit with Gimi MS Corporation. Estimated to cost US$ 1.3bn, the FLNG development involves the conversion of LNG carrier Gimi at Keppel Shipyard in Singapore.

GIMI MS will construct and operate the FLNG unit. It will invest 70% of its total development cost, while First FLNG, a subsidiary of Keppel Capital, will provide the remaining 30% of the FLNG development cost.

In the same month, Eiffage Génie Civil Marine and Saipem consortium were awarded the Engineering, Procurement, Construction, Installation, and Commissioning (EPCIC) contract for the near-shore terminal of the project.

In March, TechnipFMC was awarded the EPCIC of the FPSO unit.

In April, KBR was also awarded the pre-FEED contract for the second and third phase development of the Greater Tortue Ahmeyim offshore project.

In May, KBR was awarded the Engineering, Procurement, and Construction Management (EPCM) contract for the facilities integration as well as for the terminal quarters and utility management for the near-shore terminal of the project.

In May, the first phase of the Greater Tortue Ahmeyim (GTA) LNG project was reportedly over 58% complete.

In August, Kosmos Energy sold the GTA FPSO to BP. 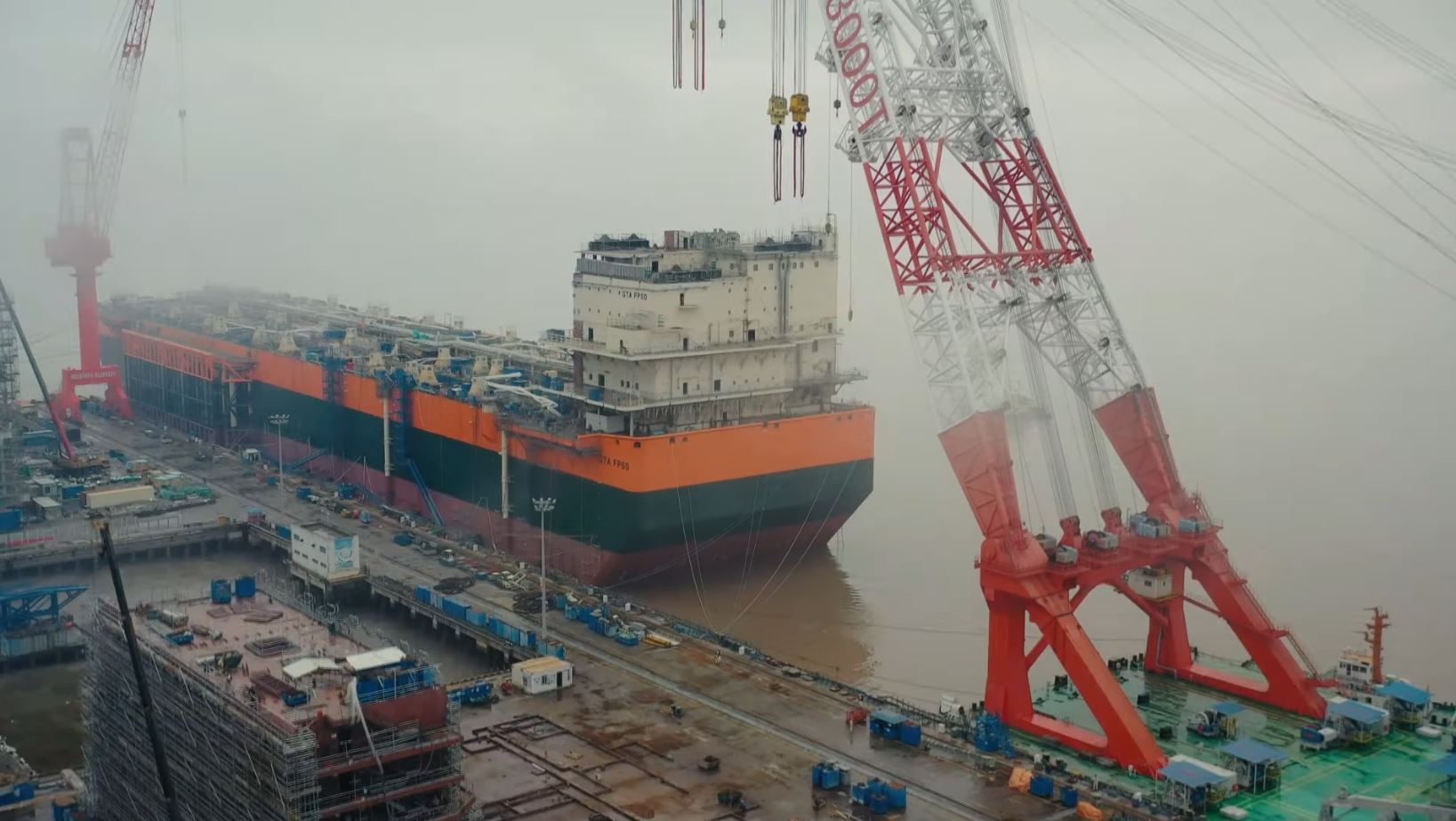 “twelve of the caissons have been installed for the breakwater for the LNG jetty and fabrication has also begun on the 20th (penultimate) caisson,” said the company adding that, “Marine supply bases have been established at Nouakchott and Dakar to support subsea operations.”