The Tanzania Standard Gauge Railway (SGR) is a railway system, under construction, linking the country to the neighboring countries of Rwanda and Uganda, and through these two, to Burundi and the Democratic Republic of the Congo. The new Tanzania SGR is intended to replace the old, inefficient meter-gauge railway system and reduce road congestion. It is also expected to decrease freight costs by 40%. Each freight train is expected to transport up to 10,000 tonnes, equivalent to 500 lorry loads. Tanzania to construct US$7b railway line from Dar to Burundi

The 202km Phase 1 (Dar es Salaam–Morogoro) Section was contracted to a 50/50 consortium of Yapi Merkezi of Turkey and Mota-Engil of Portugal. Construction began in April.

In September, the government of Tanzania secured a US $1.46bn soft loan from Standard Chartered Bank, for the funding of Phases 1 and 2, a total of 550km. 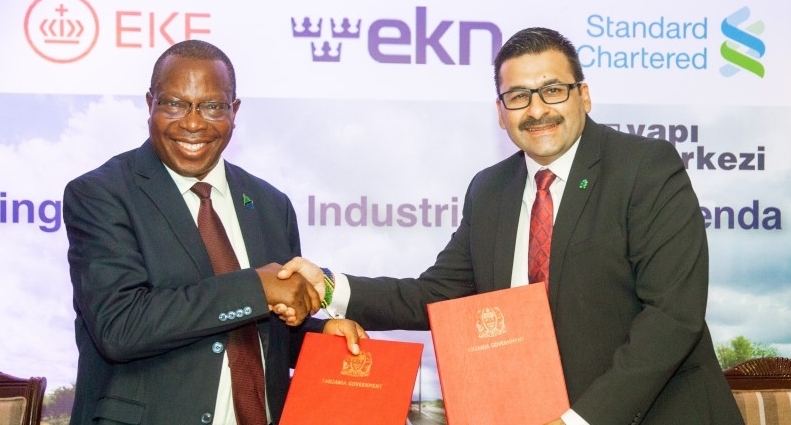 Section 2 was also contracted to the Yapi Merkezi and Mota-Engil consortium. This section stretches from Morogoro through Dodoma to Makutopora in Singida. The stations after Morogoro will be Mkata, Kilosa, Kidete, Gulwe, Igunda, Dodoma, Bahi and Makutopora.

In February, 42% of phase 1 was reported as complete. In May, it was announced that the section was 60% complete and that the first passenger trains are expected to start service in December. By June 2020 the work was 82% complete. This section will have six stations: Dar es Salaam, Pugu, Soga, Ruvu, Ngerengere, and Morogoro.

Tanzania Prime Minister Kassim Majaliwa announced that phase 1 of the SGR from Dar es Salaam–Morogoro was 90% complete and was on course for completion within the agreed time limits. What remained for the Morogoro SGR station is the installation of electricity transmission lines. According to the PM, the rail service will begin next April.

The modern Morogoro SGR station will be able to handle 800 passengers a day, parking more than 150 cars and motorcycles, while offering auxiliary services. When complete the first phase will halve the traveling time from Dar es Salaam to Morogoro from three hours to one and a half hours.

It was announced that the construction of a 220 kV, main power transmission line for the Standard Gauge Railway (SGR) train, Dar es Salaam-Morogoro segment, is almost complete with the project reaching 99%. The transmission line covers a total of 159km from the main Kinyerezi center to the Morogoro Region.

Meanwhile, plans for the second phase project; a 420km power transmission line with 220 kV from Morogoro to Makutupora in the Singida region is on course.

The Tanzania Electric Supply Company Limited (TANESCO) Managing Director, Dr. Tito Mwinuka said during the 50th Tanesco Workers Council convened recently in Morogoro that the SGR, one of the strategic major projects undertaken by the fifth-phase government was progressing well. 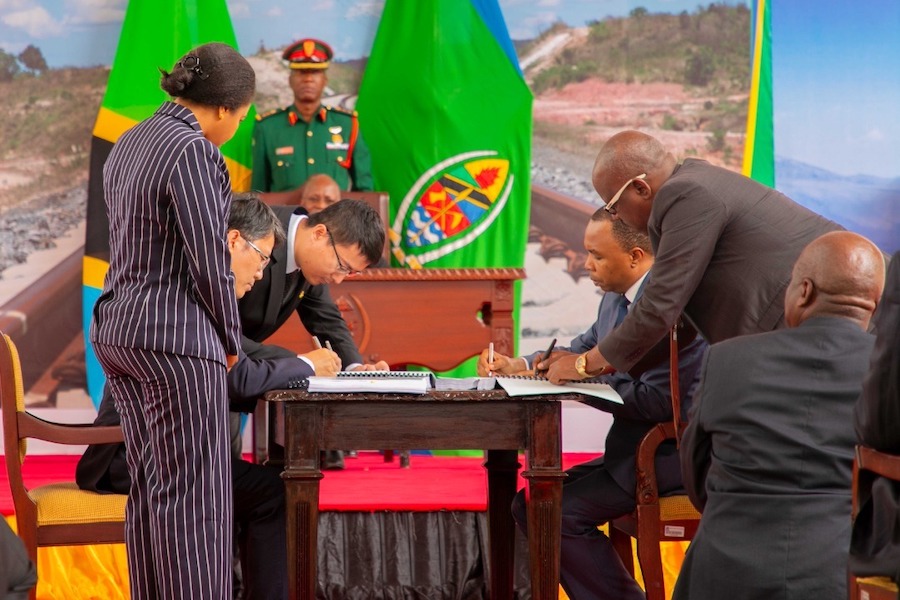 Tanzania’s foreign minister Prof Palamagamba Kabudi announced that two Chinese companies China Civil Engineering Construction (CCEC) and China Railway Construction Company (CRCC) have won a tender to construct phase 5 of the Tanzania SGR from Isaka to Mwanza. According to the minister, the 341km section will cost US $1.3bn.

Government spokesperson Dr. Hassan Abbas announced that construction of the first phase from Dar es Salaam to Morogoro is expected to be completed and operational this year after the Government released US $118.2m to the contractors.

According to the spokesperson, the government’s intention is to ensure that the construction is completed on time. “My friends, the stretch from Morogoro to Dar es Salaam will start testing this year,” he said.

Tanzanian Prime Minister Kasim Majaliwa announced that construction of the second phase of Tanzania’s standard gauge railway (SGR) from the Morogoro region to Makutupora in the Dodoma region covering 426km is on track. According to the Prime Minister, a report presented to him by Tanzania Railways Corporation (TRC) indicated that construction of the Morogoro-Makutopra section has reached 51.9%.

“I am impressed with the construction pace of the new railway line and I hope it will be completed before February 2022,” said the PM after inspecting SGR’s construction between Igandu and Dodoma stations. He further commended the Tanzania Railways Corporation (TRC) which oversees the construction of the SGR by Turkish company Yapi Merkezi.

Around the same period, the Tanzania Railways Corporation (TRC) announced it is set to start testing the standard gauge railway (SGR) power systems over three months. The power is run by four sub-stations along the completed 300km stretch between Dar es Salaam and Morogoro. The sub-stations are 50km apart, with 19 transformers.

The test which will be done in two main stages, the unit test and the component test; will ensure that the whole system is well installed and connected to the national grid whose electricity is supplied by three main sources of power: steam, gas, and hydropower generation.

The government approved the spending of US $160.5m as a starting budget for the construction of the 341km Standard Gauge Railway (SGR) from Isaka to Mwanza. During the release of the funds at State House in Dar es Salaam, president Suluhu Hassan directed TRC boss Masanja Kadogosa to properly supervise the implementation of the ongoing railway projects and as well get ready to begin the construction of the SGR line from Makutopora-Tabora, Tabora- Isaka- Kaliua- Mpanda and Kalema.

The government allocated the US $513m to the construction of the SGR in the 2021/22 financial year.

In mid-June, President Samia Suluhu Hassan laid a foundation stone for the construction of the fifth lot of the Standard Gauge Railway (SGR) at Misungwi, Mwanza.

Hyundai Rotem secured contracts worth US $295.65m from Tanzania Railways Corporation (TRC) to deliver eco-friendly train cars. TRC would receive 80 train cars worth US $190.12m and 17 electric locomotives worth US $105.53m from Hyundai Rotem, which are expected to be delivered by 2024.

As part of the Standard Gauge Railway (SGR) line project which would connect to Rwanda, the new train cars would operate on a 546km high-speed electric line spanning between Dar es Salaam and Makutupora. Tanzania is set to become the first country in East Africa to have electric trains.

CRDB Bank Plc said that it was able, willing, and ready to finance the construction of the next Standard Gauge Railway (SGR) phases if the government agrees. The bank’s managing director, Mr. Abdulmajid Nsekela, said that after participating in the financing the first and second sections of the project, the lender was willing to do the same for the remaining parts.

CRDB has so far invested over US $107.8m to facilitate smooth operation of the project through the issuance of guarantees for Yapi Merkez. It has also financed the operations of local sub-contractors and suppliers to ensure that work does not stop.

Tanzania Railways Administration signed a close to US$ 2bn agreement with Yapı Merkezi Holding A.Ş for the construction of the 3rd phase of the Tanzania High-Speed ​​​​Railway (SGR) Project. 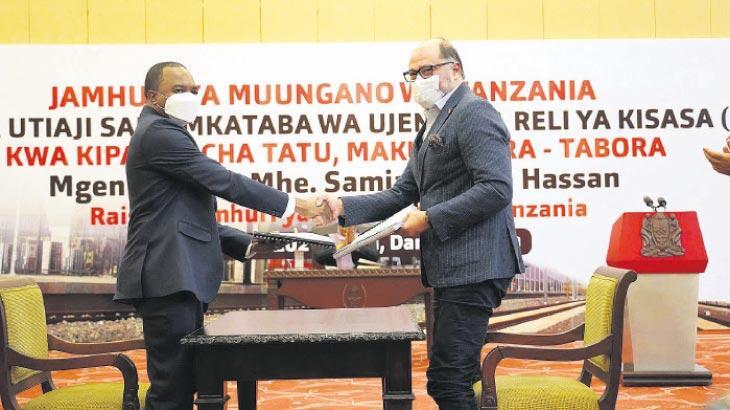 As per the agreement, the Turkish group company will be responsible for the construction of a 358 km single-track railway line, and a total of 7 stations between the cities of Makutupora and Tabora. It will also install signaling, telecom, and electrification system along the route.

This project is planned to be delivered in 46 months’ time.